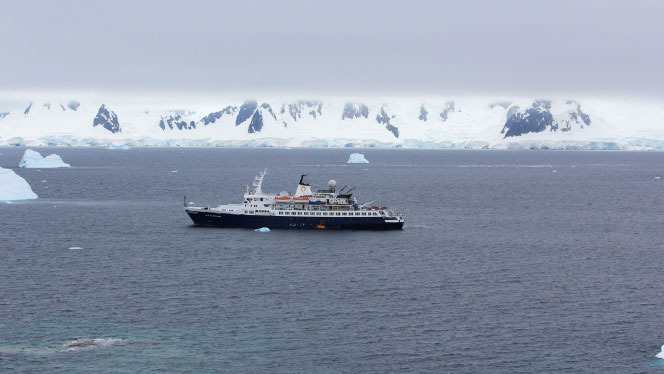 Day 2 — Kangerlussuaq, Greenland
Kangerlussuaq, Greenland Just 60 km (37 miles) north of the Arctic Circle, Kangerlussuaq sits at the head of one of the longest fjords in Greenland. Musk ox and Arctic foxes inhabit the tundra-covered plain that surrounds the town. We will arrive by way of our group charter flight and then transfer to the Sea Adventurer. Tonight, enjoy views of the fjord as the evening turns to twilight.

Day 3 — Itilleq and Sisimiut
As we head north, the ship will reach the village of Itilleq, a typical Greenlandic village. Situated on a hollow, Itilleq is on an island without any fresh water. The village has approximately 130 inhabitants and offers charming views of colorful native houses along the tundra.

In Sisimiut, we will be treated to a traditional kayaking demonstration. Kayak is an Inuit word the English borrowed to describe a small vessel propelled by paddles, seating one or two people. There will be time to explore the town where 18th century buildings from Greenland’s colonial period still stand. Take the time to wander through the historic area by passing under the arch formed by two giant bowhead whale bones.

Day 4 — Ilulissat
Ilulissat Kangerlua is Greenlandic for the Iceberg Fjord. The glacier at the head of the fjord is the most productive in the Northern Hemisphere. The icebergs it calves float down the fjord to enter Baffin Bay. As the ship approaches Ilulissat, have your cameras ready to take photos of young icebergs. The journey of these ‘bergs’ will end years later, somewhere off the coast of Newfoundland. So significant is Ilulissat Fjord that UNESCO has designated the area a World Heritage Site. Listen to the growling of the icebergs as we cruise the fjord in Zodiacs. We'll offer a hike along the lovely boardwalk down to a stunning viewpoint of the bay, or a helicopter ride to the foot of the glacier. If you have a little time left, enjoy a local microbrew at a pub, or shop for local handicrafts.

Day 5 — Eqip Sermia
You’ll visit one of the best-run small villages in Greenland, Saqqaq. Several anthropologists have published books on the village’s original inhabitants and their hunting methods. The town gave the ancient people their name Saqqaq. We then sail to the beautiful glacier Eqip Sermia, tracing the massive glacier front for some distance.

Day 6 — Uummannaq
You'll want to be out on deck as the ship approaches Uummannaq regardless of the time of day. The vista is simply breathtaking. The heart-shaped mountain that gave the town its name dominates the view.

Uummannaq was founded as a Danish colony in 1758 on the Nuussuaq mainland, but in 1763 it was moved to the nearby island, as seal hunting was more plentiful there. On your walk through the town, you’ll visit the historic oil warehouse built in 1860. Look for the peat hut, behind the warehouse, which was still in use up until a few years ago.

In the afternoon we’ll visit Qilaqitsoq where five Greenland mummies were discovered in 1972. Four women and a child are thought to have drowned and remain buried in a dry and cool cave for the last 600-700 years. The mummified remains are kept in Nuuk, the capital of Greenland.

Day 7 — Baffin Bay
Baffin Bay is technically a sea not a bay; it is an extension of the Arctic Ocean, the massive body of water that separates Canada from Greenland. As the ship sails westward, travelers should be on the lookout for icebergs and seabirds gliding on the wing, and whales in the water below.

Day 8 — Pond Inlet, Nunavut, Canada
Arriving in the Canadian Arctic, the people of Pond Inlet or Mittimatalik – as it has been called by the Inuit for thousands of years – will welcome us to their town and the Artist’s Co-operative. In addition to the internationally renowned art they produce, the people of “Pond” earn their living fishing for Arctic char. We will have time to take photos, explore the hamlet and hike the nearby tundra to a local Thule site before returning back to the Sea Adventurer.

Day 9 — Day 9: Devon Island
In the Maxwell Bay region of Devon Island, you will go for hikes and cruise in Zodiacs as you visit a Thule site, where the ancestors of the Inuit lived. Watch for wildlife at Dundas Harbour as walrus and musk ox inhabit the area. The abandoned settlement you'll visit was once a Royal Canadian Mounted Police depot. This depot is still considered active, as every year a detail of Mounties arrives to tend the graves of their fallen comrades. 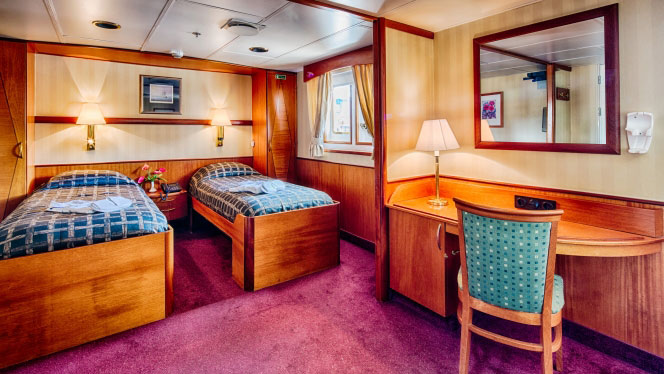 Day 10 — Beechey Island
Just offshore at the western end of Devon Island is Beechey Island. There, on a stony beach, stand three grave markers; solemn reminders of the lives lost during Sir John Franklin’s search for the Northwest Passage. Upon approach to Beechey Island, we will be treated to presentations about Franklin and his expedition. Radstock Bay has an impressive archaeological site and is beside Caswell Towers, used as a polar bear observation point.

Day 11 — Somerset Island
We'll call on Somerset Island, in Peel Sound, located above the 74th parallel directly on the Northwest Passage (close to 800 km north of the Arctic Circle). Here we may see Peary caribou and musk ox, as well as the hundreds of thousands of birds that nest on the sheer cliffs of Prince Leopold I, off the NE tip of Somerset. The island was named by Lt W.E. Parry who discovered it in 1819, after the county in England.

Day 12 — Fort Ross and Bellot Strait
Through the night we'll be sailing in a southerly direction, following the coast of Somerset Island, just as Amundsen did. We plan to go ashore at Fort Ross, an uninhabited Hudson’s Bay Company trading post. In May 1670, King Charles II granted the lands of the Hudson Bay watershed to “the Governor and Company of Adventurers of England trading into Hudson Bay.” For nearly two hundred years, the administration of Canada’s north was the responsibility of the merchants of the Hudson’s Bay Company. We sail westward through Bellot Strait, a narrow channel separating mainland North America from Somerset Island. About mid-point through the channel is the northernmost area of the continental land mass, Zenith Point.

Day 13 — Victory Point
In 1845, John Franklin led an expedition of 129 British naval officers and seamen to the Canadian Arctic, tasked with finding the Northwest Passage. By 1848, they were presumed missing. Rescue missions were conducted for 32 years. The first skeletal remains attributed to the crew were discovered in 1859 by Captain Francis McClintock on the western shore of King William Island. McClintock also discovered the only written remains under a cairn erected on Victory Point.

Since 1859, many skeletal remains and artifacts from Franklin’s expedition have been found at various locations on King William Island. The most recent was in 2013 when Parks Canada gathered several bones for identification and analysis, as well as about 200 small artifacts, ranging from bits of canvas and leather to nails, rivets, cans, metal containers, cast iron and rope.

Day 14 — King William Island
Here, we’ll return to the site of Sir John Franklin's saga. For two winters, Franklin’s ships Erebus and Terror were beset in ice near the island. In 1848, the ships were abandoned.

A decade passed before a cairn with a terse note of explanation was discovered on Victory Point. The questions raised by that discovery have inspired search expeditions into the 21st century.

In 2008, remnants of copper sheeting believed to be from the ships were discovered during a six-week expedition under the auspices of Parks Canada in the area of O’Reilly Island. Weather and ice conditions permitting, we may attempt to visit the community of Gjoa Haven.

Day 15 — Coronation Gulf and Cambridge Bay
In 1821, on an earlier voyage to the Arctic, Sir John Franklin named the gulf in honor of the coronation of King George IV.

Your Expedition Team will use ice charts, weather forecasts and their years of Arctic expedition experience to make the most of time spent in Coronation Gulf. You will go ashore to hike or cruise in Zodiacs in search of wildlife. If weather conditions permit, visits will be made to historic sites.

The people of Iqaluktuuttiaq, also known as Cambridge Bay and the largest community on Victoria Island, will welcome our ship and guests to their culture through dance and song. Travelers will have time to explore the community of 1,400, a commercial hub for the region.

Day 16 — Bathurst Inlet
In the area around Bathurst Inlet, we’ll enjoy a hike on the tundra among the spectacular fall colors. Here we will fully appreciate the lush flora that flourishes briefly during the short Arctic summer. This is also the area where the first polar bear and grizzly hybrid was discovered, and we’ll be on the lookout for all three species.

Days 17 and 18 — Amundsen Gulf
At the eastern end of the gulf is Dolphin and Union Strait, crossed in 1851 by Dr. John Rae, his two companions, two sledges and five dogs. At the completion of that expedition, Rae and his companions were only 80 km (50 miles) west of the beset ships of Sir John Franklin. Had Rae known, perhaps Franklin’s expedition would have had an entirely different ending. Our in-depth education program will provide the basis for on-going discussions over dinner or drinks in the bar.

Day 19 — Kugluktuk (Coppermine)
Our final destination is the town of Kugluktuk. We will have a chance to explore and bid the community farewell. We’ll later make our way to the airport where we board our charter flight back to Edmonton. Upon Arrival in Edmonton, we will be transferred to our nearby airport hotel.

Day 20 — Edmonton (Departure)
Today you can make you way home at your leisure or spend some more time in the Edmonton area.

Important reminder: Embracing the unexpected is part of the legacy – and excitement – of expedition travel. When travelling in extremely remote regions, your expedition staff must allow the sea, the ice and the weather to guide route and itinerary details. The above is a tentative outline of what you’ll experience on this voyage; please be aware that no specific itinerary can be guaranteed.

Package starts at $11,995 - contact us for more information on this exciting experience! 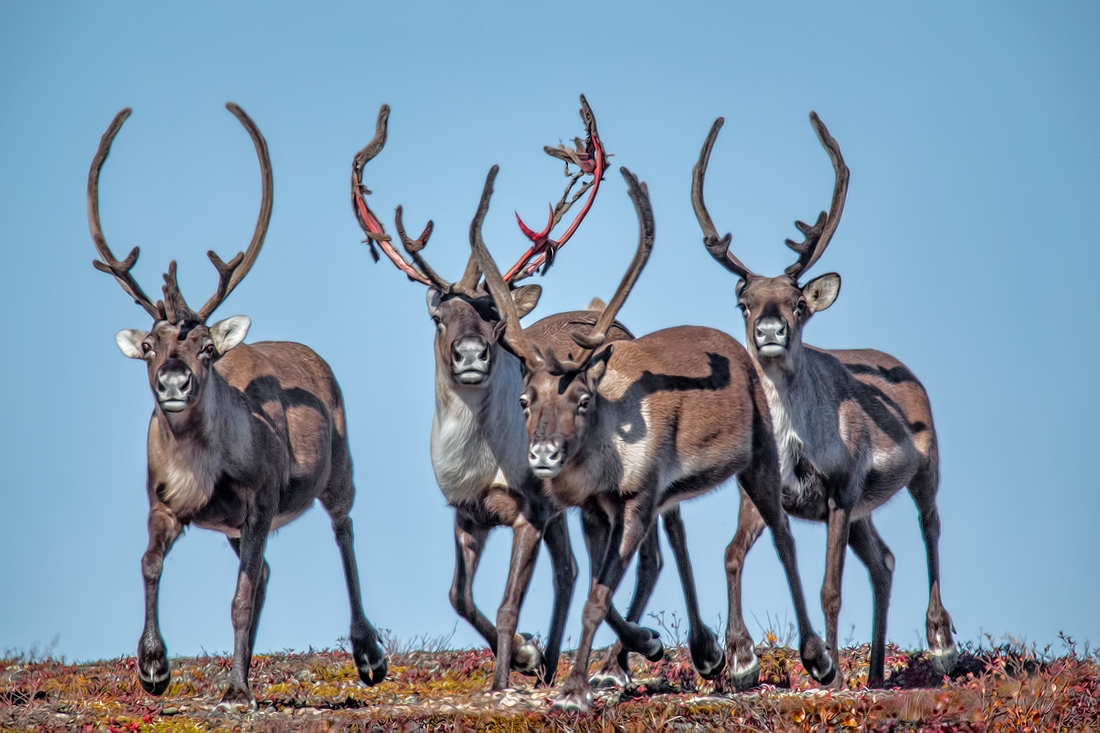 Spend a vacation around the wild grounds of Arctic Haven Wilderness Lodge.

Arctic Haven is located on Ennadai Lake, one of the great northern lakes in the Canadian Barren Lands. The lodge in on the tree line; go north and there are no trees, go south and it quickly become forested, a location rich in wildlife.The lodge is in the path of one of great caribou migrations; the Qamanirjuaq caribou herd of more than 300,000 animals. 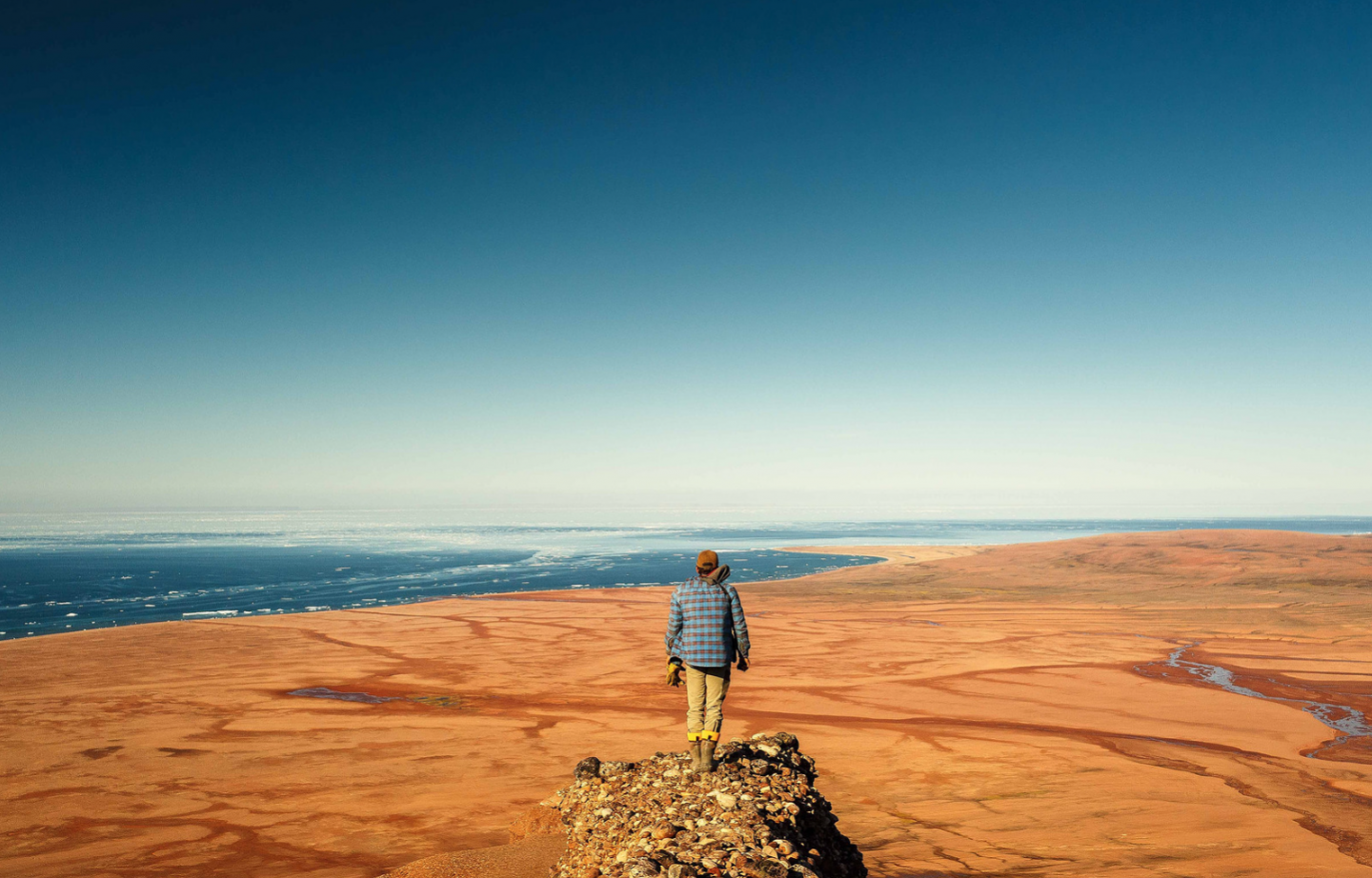 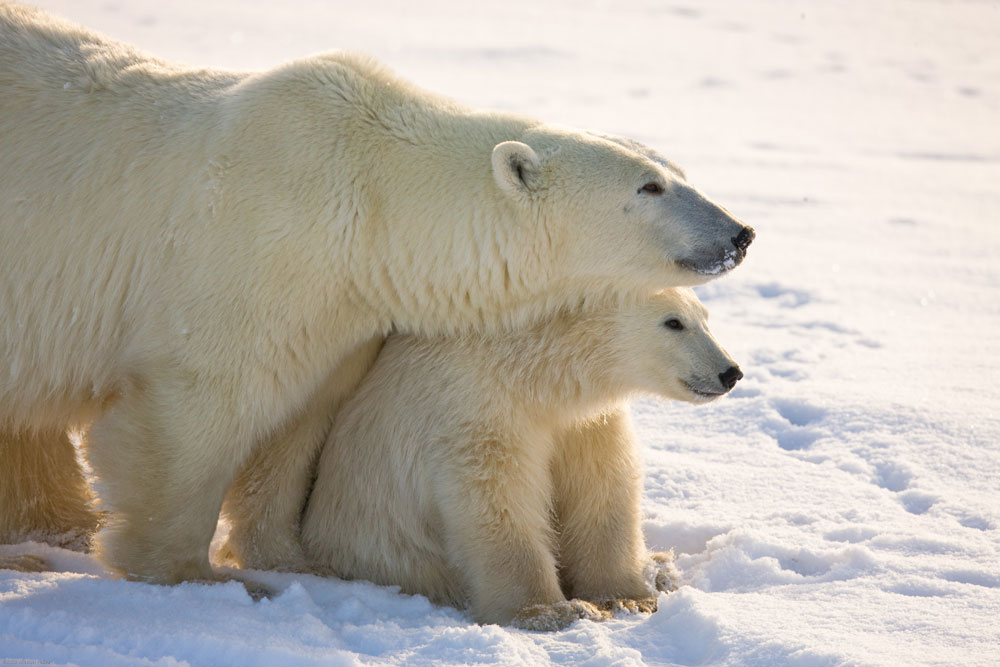 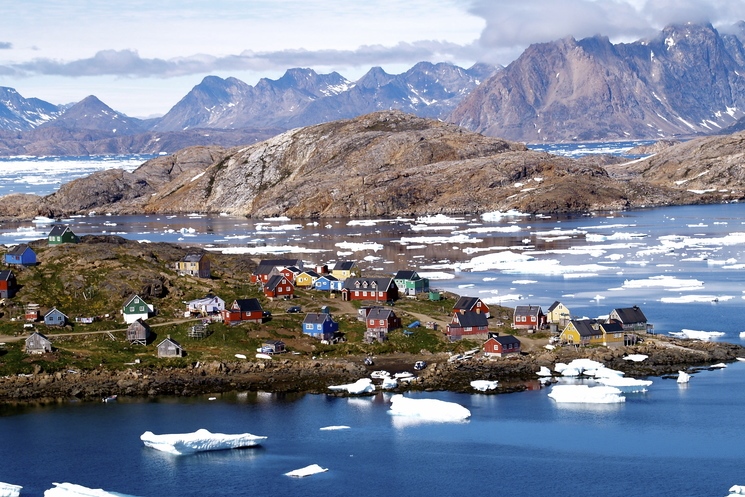